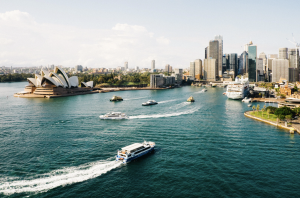 It’s the news we have all been waiting for: the Australia-New Zealand travel bubble (or trans-Tasman bubble as it is officially referred to) is almost here. Opening on October 16, the bubble will kickstart travel between Australia and New Zealand. Similarly to all rules surrounding COVID-19, the bubble is a little complex, so here’s everything you need to know.

While the official bubble kicks off on October 16, the first stage of proposed movement is limited to New Zealanders travelling to Australia. While there are ongoing discussions between Prime Minister Jacinda Ardern and Australian Prime Minister Scott Morrison regarding the re-opening of New Zealand to Australians, no outcome has been determined yet.

Prime Minister Jacinda Ardern said New Zealand will not open its borders for quarantine-free travel until it is completely safe to do so.

For New Zealanders headed to Australia

As it currently stands, for those New Zelanders who do make it to Australia, their travels will still be somewhat limited. Only New South Wales and the Northern Territory are currently accepting visitors from New Zealand, however there is word that South Australia will jump on board shortly.

The re-opening is in direct correlation with each state’s lowering COVID-19 figures. According to Australian Deputy Prime Minister Michael McCormack, it all has to do with the Commonwealth’s definition of a COVID-19 hotspot. This means that New Zealanders will only be allowed to visit Australia if they haven’t been in a designated COVID-19 hotspot in the previous 14 days.

Will travellers have to quarantine?

As it stands, the Trans-tasman bubble means that New Zealanders can enter Australia without quarantining from midnight on October 16. The Deputy Prime Minister said ‘green lanes’ will be implemented in airports and extra staff will be rostered on in order to stay on top of the potential need for contact tracing.

However, Prime Minister Jacinda Ardern has confirmed that New Zealanders will be required to isolate for 14 days upon returning home.

While the road ahead is long, the introduction of the Australia-New Zealand travel bubble is a sure sign that freedom isn’t as far out of our reach as we first thought.